Causes and Symptoms of Seizures in Dogs

Seizures in dogs can be caused by a number of factors ranging from heat exhaustion to epilepsy. Today our Ventura vets help you to understand more about seizures in dogs.

Our vets understand that seeing your dog have a seizure can be distressing. However, understanding more about the causes of your dog's seizures and how to respond may help to make the situation a little less stressful for you and your pet.

A seizure occurs when the cerebral cortex of the brain malfunctions, resulting in a loss of control over their body, they can be very subtle or they can cause violent convulsions. Seizures in dogs can occur once and never occur again, or they can occur repeatedly.

What causes seizures in dogs?

There are two types of seizure causes, extracranial and intracranial.

Extracranial causes of seizures originate elsewhere in the body but are still able to affect the dog's brain and cause seizure activity. The most common extracranial causes are hypoglycemia, hypocalcemia, hyperthermia, hypothyroidism, liver disease, or ingested poisons such as caffeine, chocolate.

Intracranial causes of seizures are diseases that cause either structural or functional changes inside the dog's brain. The most common intracranial causes are genetic epilepsy, trauma to the brain, tumours, nutritional imbalances, autoimmune disease, or infectious diseases such as canine distemper virus (CDV) and rabies.

What are the signs and symptoms of seizures in dogs?

There are several types of seizures in dogs, and varying symptoms. Some symptoms are more noticeable than others.

Partial or focal seizures only affect a particular region within one side of the brain. Symptoms of focal seizures can include, hallucinations that lead the dog to growl at nothing or bite at the air, hackles standing on end, dilated pupils or coordination issues. These types of seizures can be difficult to recognize and can often be perceived as strange behavior.

Partial or focal seizures can evolve into generalized seizures, progression is most likely if the initial seizures are not treated. Therefore, it is important to pay attention to your dogs behaviours and symptoms. If your dog begins show signs of a seizure, try to think back to what the pet was doing right before the seizure began and notify your vet.

Are there breeds of dogs that are more prone to seizures?

Some dog breeds are more at risk for experiencing seizures:

When should I call a vet?

Most seizures are short, lasting only a few minutes, and with proper treatment your dog can lead a normal life. However, seizures can be a serious health concern and even short seizures could cause brain damage.

If your dog shows signs of having a seizure it's important to contact your vet to let them know. While not all vets will advise bringing your pet in for an examination, depending on the severity of the seizure, an exam may be recommended.

Can my dog die from a seizure?

Contact your vet immediately, or visit the nearest emergency animal hospital, if there is a chance that your dog is having a seizure due to poisoning, if your dog's seizure lasts longer than 3 minutes, or if your dogs has more than one seizure in a row! Seizures lasting for more than 5 minutes could cause serious permanent brain damage.

If your dog is showing symptoms of seizures, contact our Ventura emergency veterinary hospital right away. 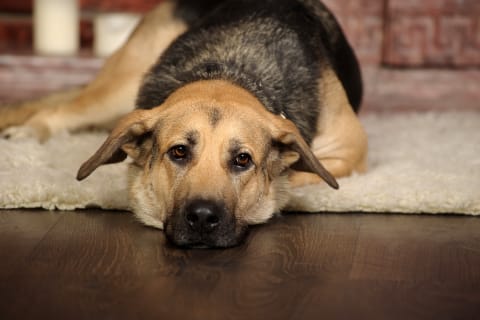