The Types and Symptoms of Anemia in Cats

Our Veterinary Medical and Surgical Group (VMSG) veterinary team will describe here the different varieties of anemia in cats and offer some information about their symptoms and what to do if you suspect your cat has anemia in the Ventura area.

Anemia is a term which describes a drop in the amount of hemoglobin, red blood cells or both in your cat's blood. Anemia almost never appears on its own. It is most often a symptom of another underlying condition or disease.

If you notice that your cat seems uninterested in food or treats, is breathing rapidly even while relaxing and is more lazy or lethargic than they usually are, your cat may be suffering from a condition causing anemia.

Anemia in Cats: The Three Types

There are three varieties of anemia found in cats: autoimmune hemolytic, non-regenerative and regenerative anemia. Each has their own unique causes and specific mechanisms of reducing the cell counts in your cat's blood.

Whether it is caused by parasites, blood loss, serious illness, or a physical injury, regenerative anemia is brought on by acute or very sudden and significant blood loss. In the case of illnesses or conditions causing this kind of anemia, they do so by destroying your cat's red blood cells.

Regenerative anemia most often affects younger cats rather than older ones.

Non-regenerative anemia in cats can include chronic diseases such as kidney failure, liver disease, or bone marrow disease.

The most common underlying cause for non-regenerative anemia ( an anemia in general) in cats is kidney failure. Usually, kidneys produce a hormone that encourages the production of red blood cells in your cat. When your pet's kidney's aren't functioning properly, they won't be able to replace the cells as quickly as they are used, leading to anemia.

Autoimmune Hemolytic Anemia (AIHA) in cats is a disease of the immune system which destroys your cat's red blood cells. This disease is also sometimes called immune-mediated hemolytic anemia (IMHA).

AIHA is more commonly secondary, since an underlying toxin or disease alters the surface of the red blood cells. Most cats with AIHA have severe anemia, which causes symptoms such as pale gums (usually, the gums are normally pink or red in color).

The symptoms your cat will exhibit will be very dependent on the underlying cause of their anemia, the kind of anemia they are experiencing, and the severity of their case.

The most common symptoms can include:

Other symptoms may include:

What should I do if my cat shows symptoms of anemia?

If your cat is showing any of the symptoms listed in the section above, make sure you book an appointment with your vet as soon as you can. Your vet may need to take a series of diagnostic blood tests, sometimes called a complete blood count (or CBC).

In order to provide an official diagnosis and an identification of the type of anemia your cat is suffering from, more tests will likely be required. They will also help to determine the underlying condition, disease or injury which is causing your pet's anemia.

If you discover blood in your cat’s feces or vomit, this is a medical emergency that requires immediate attention from your vet.

Do you suspect that your cat is showing some symptoms of anemia? Contact your vet as soon as possible to ask them about diagnosis and referrals. Our Veterinary Medical and Surgical Group (VMSG) veterinary team have extensive experience in diagnosing and treating anemia in Ventura cats. Contact us today for more information. 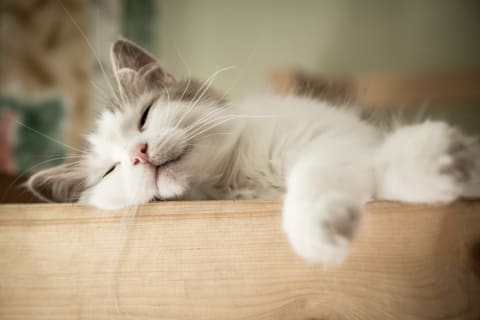 Is My Cat Overweight?

You may just think of your cat as cute a cuddly, but carrying some extra weight—even just a few ounces—can impact their long-term health. Here, our Ventura vets can explain how to tell if your cat is overweight and what to do to help your cat maintain a healthier weight.

Fungal infections can pose a serious health threat for our feline friends. In some cases, your cat's fungal infection could even be passed along to you and your family. Our Ventura vets explain some causes, symptoms and treatments for fungal infection in cats.

Cat Urinary Tract Infection - What You Need To Know

Although they are rare when compared to the occurrence of Urinary tract infections in dogs, older cats may experience UTIs or other urinary tract issues that cause similar symptoms. Here, our Ventura vets share the causes, symptoms and treatments for these infections and related diseases in cats.

10 Reasons Why Your Cat is Not Eating

Cats are notorious for being picky eaters. But, you shouldn't assume that this is the only reason your kitty isn't eating. Here, our Ventura vets explain some other possible causes and when it is time for a veterinary visit.